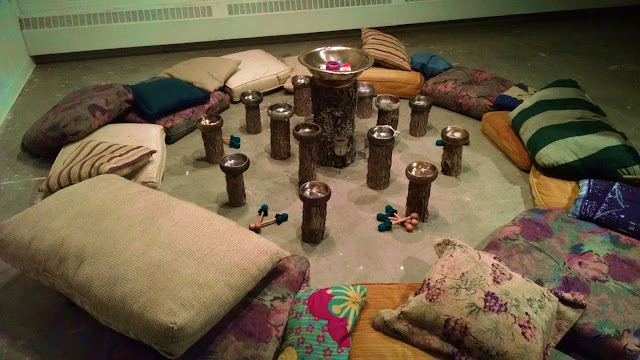 ﻿﻿Looking into other forms of bells, I found out about the Tibetan Singing bowls. The traditional bowls are musical instruments used in meditative practices. They are played with the bowl resting on a surface as a padded mallet strikes the rim, causing the rim to vibrate and producing sound. The shape of the bowl allows the sound to resonate within it much like a bell does. I purposefully neglected to focus on the shape of the bowls that I made. Holding with a shape that made a workable noise, I was highly interested in experimenting with materials, and how varying materials change the sound of a given shape. So I made a bowl for each possible combination of the three metals commonly used at Alfred University’s National Casting Center.


Iron and bronze have similar melting points, and can be poured together in a variety of ways. Aluminum has a much lower melting point, so it will ignite if poured directly with iron or bronze. In order to combine aluminum with iron or bronze, I made sand-molds that held the bowl sideways so the hotter metal could be poured in first until it reached a halfway point where it drained out of a spout through the side of the mold. The spout was then plugged and when the initial metal had cooled enough, the aluminum was poured into the mold.


Sound propagates differently in different metals. When a sound wave encounters an interface between two metals it creates multiple sound waves, many of which cancel each other out and dampening the sound. Additionally a thin layer of impurities likely formed between the metals that were poured separately. The best resonance was achieved when the bowls were made entirely of one metal, followed with a combination of bronze and iron poured simultaneously into the same mold.
The impurities between the iron and bronze of the simultaneous pour would have been hot enough to float to the top of the pour cup, while the others would have had time to cool perceptibly on the leading edges, causing a layer to be trapped. This layer could be responsible for refracting and deadening the sound, a similar effect to how a cracked glass or bell does not ring.
Traditionally, singing bowls were hand hammered, although they are made today using the more modern methods of sand casting and machine lathing. With my series I tried to leave the outside of the bowls as they were, lightly wire brushing them to remove the sand. I then polished the insides of the bowls using polishing disks and a lathe. I experimented with some patinas to lend a natural look to the bowls.
I decided that the piece relied on interaction, both auditory and tactile. I decided to create a drum circle with the bowls. They needed to be at a comfortable height so I made pedestals out of pieces of log, with the natural wood pedestals referencing the unworked exterior of the bowls and the drumming ring.
To feel like a proper drum circle I thought there must be a bright fiery center, so I made a large polished bronze bowl for the center of the circle. I filled it with candles, and surrounded it with candles that would reflect in the outside polished surface, representing a warm gathering. The limitations of the gallery space caused me to substitute candles for an open fire. The fire calls back to the process in which all of the bowls were made, born of fire in one cohesive effort, just as the drum circle itself recollects the community of the foundry.
From any seat in the circle one could reach and play at least five bowls, set in two concentric circles around the central bowl, with the drumsticks. The drumsticks were felt covered to enhance the sound quality. In all, the drum circle of bowls was designed to generate a sense of community centered on experimenting with the sounds of the bowls.
Work made during Junior Sculpture Foundry Fall '15 with Professor Coral Penelope Lambert
Posted by Firestarter at Tuesday, December 15, 2015