The void asks a question, protrusions provide an answer.


Stage 1: Introduction to the Foundry : Five Objects
I began the semester by focusing on a specific interest. Humanoid creatures and animal hybrids are recurring subjects for me. These characters represent beings from my world. For my first project, I fabricated objects from this world.
Objects and beings appear in dreams or everyday moments. 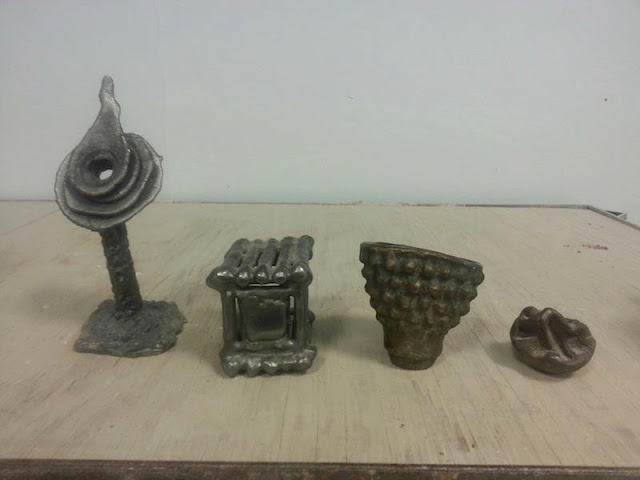 I consider these objects to be models for larger works, especially the vessel. You might notice one piece to be missing from the series shown above. The absent sculpture is a spiky, lidded vessel --‐ it went home with a stranger while I wasn’t looking. Hopefully they will care for it. 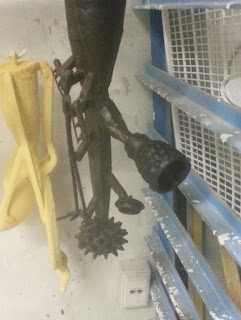 This project was also my first time working with wax, ceramic shell, chasing tools, and the patination process. After making larger metal sculptures (i.e. Planet, Fruit--‐Sun),I would discover  that chasing on a small scale presents certain challenges. For tiny sculptures, mistakes in metal finishing are easier to make and harder to hide.
Stage 2: Expansion : Sand Molds, Feet Talismans, and Sun Being. 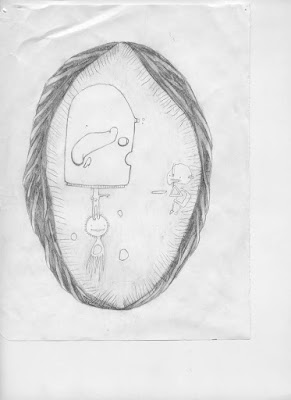 In my practice, sketches often serve as a starting point for sculptures. Sometimes, creatures drawn in improvisation take on greater significance upon extended reflection. 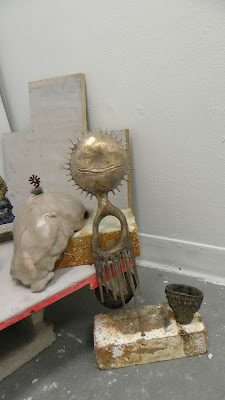 The head of Sun--‐Being is solid; occupying space with its all--‐encompassing mass. Protruding rays or antennae signify energy or growth. An empty hole for a body points to the void beyond: what lies past the radiant familiarity of a recognizable facial expression?


This creature was born in deep waters or dark space. 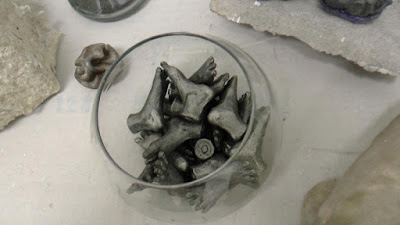 Dismembered feet are talismans to be multiplied for everyone on Earth. Maybe, they say: “think an evil thought every day.”
The butcher is in a sketchbook at my house. 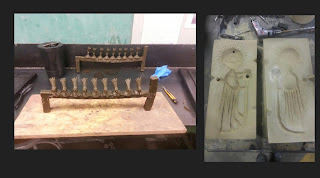 During the creation of these mid--‐semester projects, I learned how to make one--‐part wax melt--‐out sand molds as well as a two--‐part sand molds. 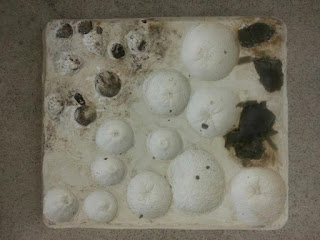 For my final project, I wanted to create a planet out of fruit. To do this, I cast wax in open--‐face plaster molds. During the process, I realized what mold making allows for is the sampling of textures and forms from the real world. By manipulating copies, I was able to obscure and re--‐contextualize what, at one time, was a familiar object. In Planet Fruit--‐Sun, the observable dimension collides with the dictates of my internal world, the familiar and the unknown merge, and the origins of the final product are concealed. Before this, I would usually point to the exterior world with referential forms. For example, my iron feet or bronze vessel, both shown in the pictures above. 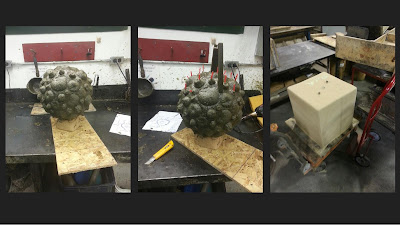 In the creation of Planet Fruit--‐Sun, the size of the piece and amount of detail required in its surface challenged my wax working skills. I built the wax around a sand core and cast the sculpture in iron using the lost wax method.


The second half of my project – which was to cast a Stick--‐man and his Air--‐plane in metal --‐ it did not turn out the way I had anticipated.  I tried several times to cast Stick--‐man, but as I discovered, it is very difficult to sprue, vent, and cast thin, tiny and tall sculptures. I used this failure as an opportunity to explore other mediums.

If he were metal, Stick--‐man would have only appeared to be fragile, but in balsa--‐wood he becomes truly delicate (although maybe he doesn’t realize it?) Lustful for expansion, he wants to go to space in his air--‐ship. 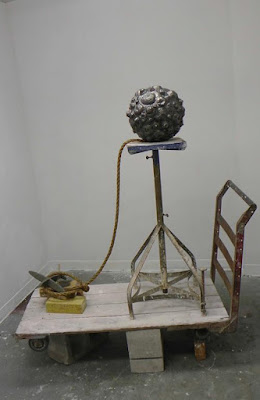 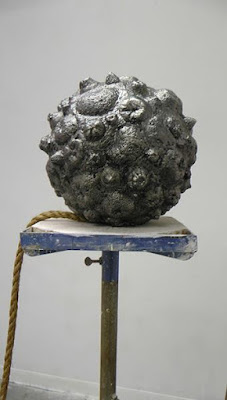 Rope signifies the invisible communication occurring between Stick--‐man and Planet Fruit--‐Sun. She says, “don’t go to space, come to me, instead.”
At the end of the semester, when it came time to set--‐up for critique, I felt as though I had been stopped in the middle of my work--‐process. I used this circumstance as an opportunity for play. Carts lifted off the ground display my work: a depiction of my process stopped in time. Visual irony occurred as an intuitive by--‐product of the installation process, and enabled me to realize that humor can add layers to a situation. 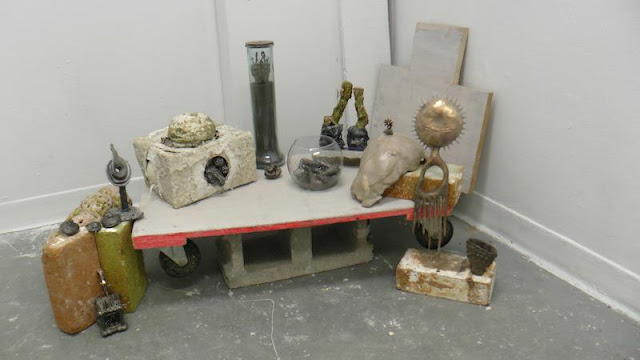 In this additional collection of objects, I brought together a variety of work in different materials to observe what kind of scenario would emerge.


Fruit--‐comets sneak out of a moldy hole


Glo--‐worms emerge from the night’s sky and give each other kisses.


Over--‐growth is exciting, but I like to contain and arrange it.

Posted by Firestarter at Tuesday, December 08, 2015