THE BRONZE STURGEON : Finds A New Home In New Hope 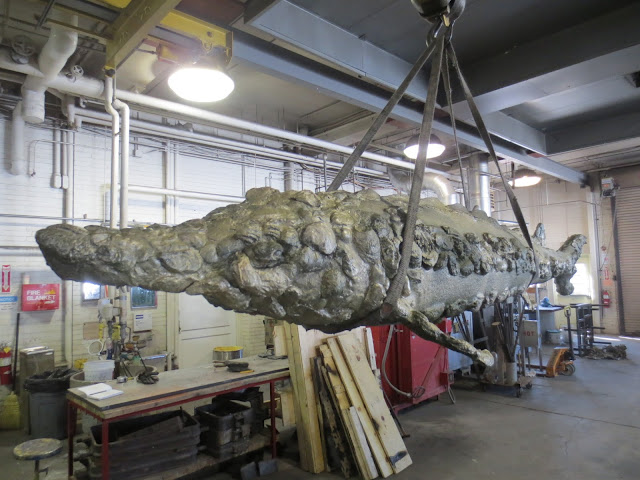 This time last year our visiting Foundry Technician Kate Graves loaded up her 9 foot long bronze casting of a beautiful Sturgeon. Its been a project in the making for many a year and we were happy to lend a hand in the casting of it and pleased to hear that it has now found a new home along the banks of the Delaware River in New Hope for all the public to enjoy! 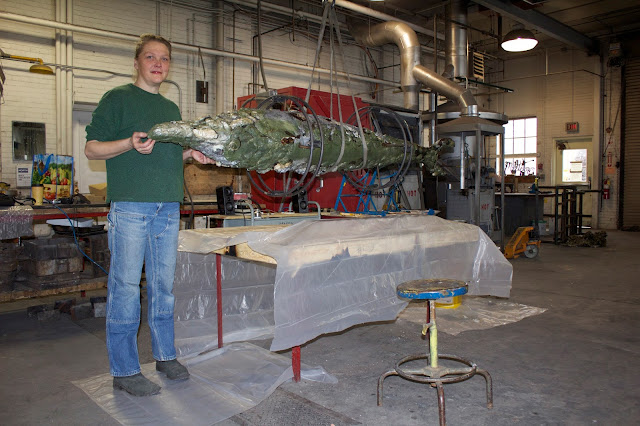 Kate has kindly shared the making of the Sturgeon story with us here  :-

“Returning Sturgeon to the River” is a sculpture series that began with a chance meeting ... 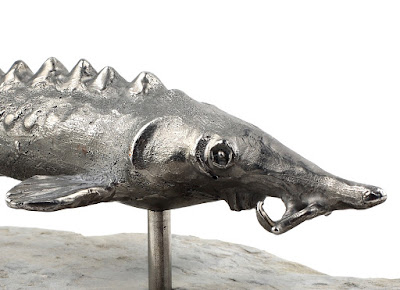 RETURNING STURGEON TO THE RIVER

As an artist, continual inspiration comes from exploring local natural and built environments. By documenting buildings and trees, my sculpture and paintings are like three-dimensional portraits that exist as snapshots made during the arc of the subject’s temporal existence. When the tree blows over or the house is torn down, people who recognize them in my work remember them, allowing them in this way to live on.
I identify with my subjects and am entirely in their thrall while examining them. Fascination with textures and the decrepit majesty of abandoned buildings in Trenton led to much research and other inquiry about the social, economic and political history of this place. Making art that alludes to entropy and the effects of neglect over time has deepened my ability to nonverbally indicate the evidence of unseen forces. Currently, the ancient and wondrous Acipenseridae calls to me from the river when I paddle my kayak on the tidal waters, watching the endless variety of textures and reflections, wondering what lies beneath.
The Delaware River is home to a genetically distinct population of Atlantic sturgeon, one now seriously compromised by 19th century caviar harvesting and pollution from heavy industry along the river. Once at an aquarium near Portland, Oregon I met a fourteen-foot long sturgeon. This 150 million year old living fossil regarded me with the weight of its own history, armored with rows of bony shields. Hovering in the water at eye level behind the plate glass, it surveyed me with an ancient gaze. I knew then that I would make sculpture to document these creatures. Whether the Sturgeon Sculpture Series will be a testament to a close call with extinction, or a memorial for something not yet gone, remains to be seen.
The New Jersey State Museum has in its Natural History archive a taxidermy mount of a Delaware Bay sturgeon that is estimated by Curator David Parris to be 100 years old. Using this as a model, my sturgeon pattern can be digitally scaled up or down. Castings in iron, stainless steel, plaster and resin have been created at a ten-inch scale. Additional planned sculpture includes a glass casting at two feet long, and a cast iron public art piece for installation within sight of the river at twelve feet long.
The project has begun: of the six sculptures produced at the 2010 Art All Night Abominog International Iron Pour, four are in private collections. Two were given permanent mounting provisions and have been installed on rocks in the river.
—Kate Graves, September 2010

Rendering from a digital scan of a Delaware Bay sturgeon, patterns have been CNC milled by Digital Atelier at ten inches and at eight feet long. Iron, bronze and aluminum castings at ten inches have been made, but finding the right time and place to realize the big fish was elusive. 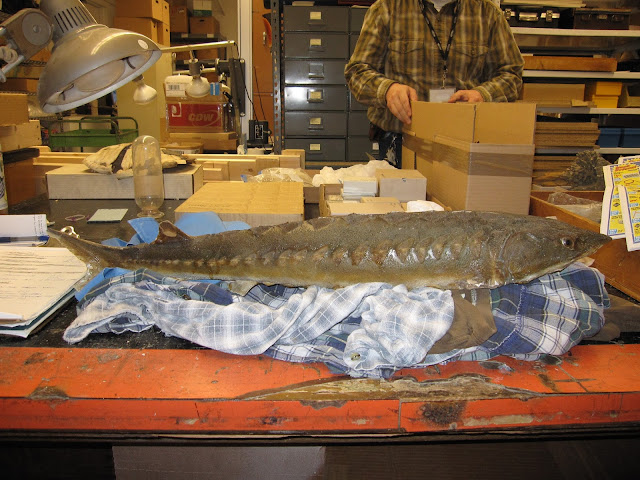 My rubber mold experience was limited, and my home studio was not well suited for the job. When the opportunity to work at Alfred University arose, it was an exciting move: access to a 7,000 sq. ft. facility, led by the dynamic Professor Coral Penelope Lambert, opened the horizon for possibility. 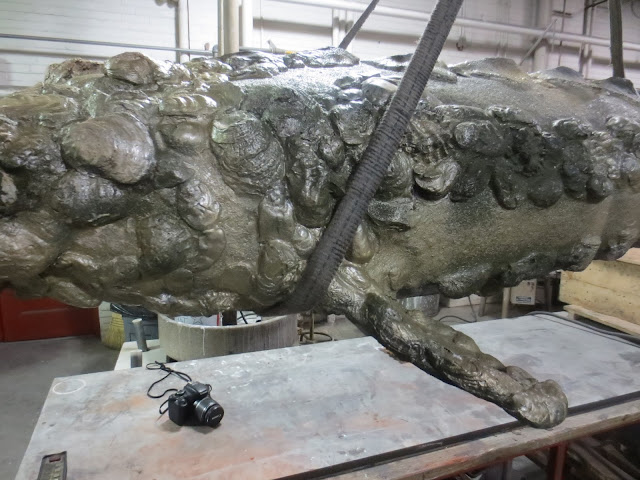 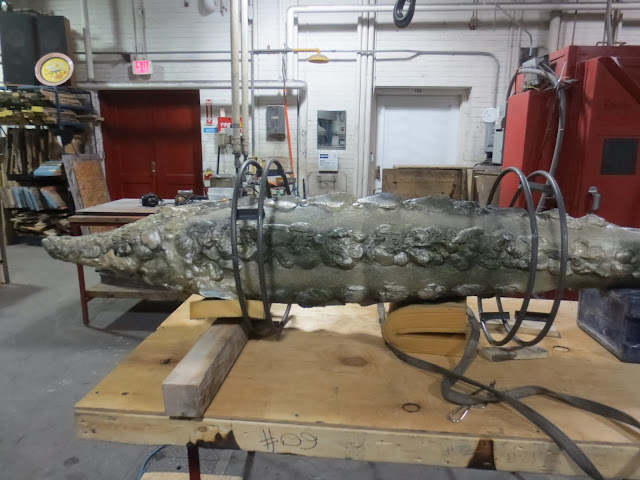 The National Casting Center Foundry is a busy place. In February 2015 we hosted the annual “Pour Your Heart Out” event, pouring (2000#?) of both induction and cupolette melted iron. Sculpture 101 student projects included large scale “Exquisite Corpse” parts in iron, and small scale centrifugal castings in bronze. With so much going on, as Foundry Technician, it was clear I needed to establish a time frame for making the rubber mold. 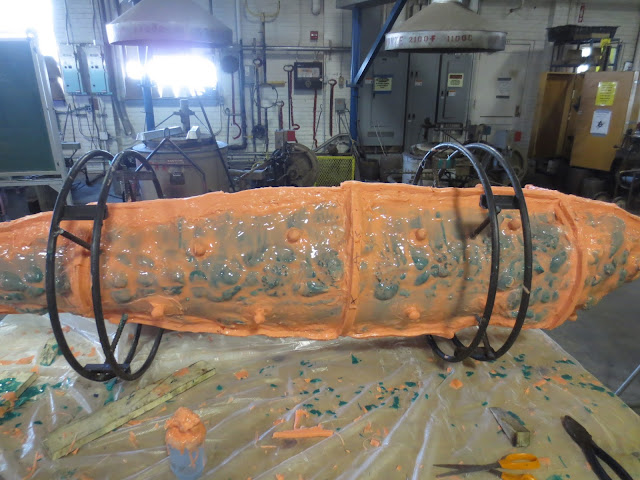 The window came in March; one week, during Spring Break. Materials included a 5 gallon kit of Rebound 25 (a paintable rubber that takes gorgeous surface detail) and a 5 gallon kit of Free Form Air for the mother mold, both manufactured by Smooth On. Their Technical Support was a tremendous resource for answering questions, as was their website, where basic tutorial videos are supplemented with documentation provided by users in the field. 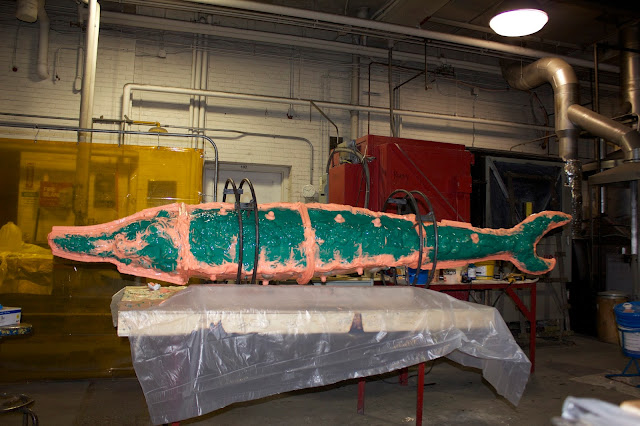 To prepare the pattern for mold, on the first day, I cut the fins off and mounted them separately on boards. Using the overhead hoist I levitated the pattern and blocked it with foam and wood to stabilize it, then introduced 3/8 rolled steel rings with a 21-inch diameter. Using an extended 1/2” drill bit I pierced the pattern multiple times, measured my hole depth, cut rebar to length and TIG welded the rebar skewers to the steel. 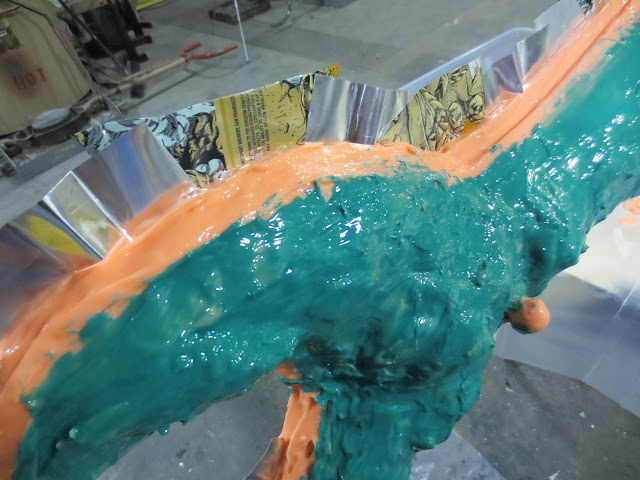 On day two, the first coat was a big step. Senior Michelle Kwiecien assisted with the application. We were vigilant about mixing the rubber, and it went on smoothly. We added green Silc Pig pigment to the second layer, so it was easy to tell when the second coat was complete. 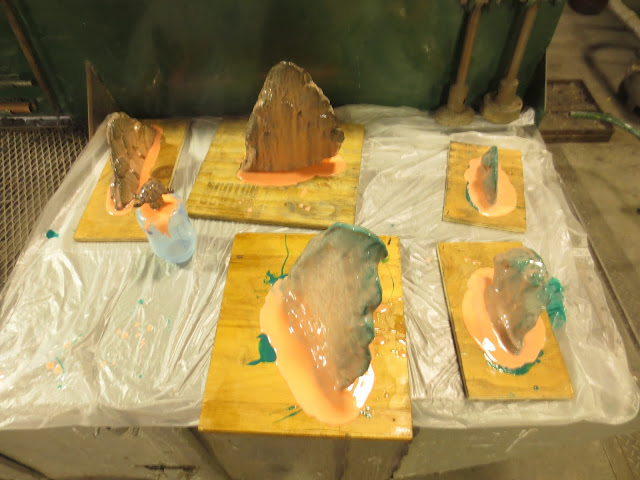 The third and fourth coats were more involved, as I had to place and secure pre-cast t-strips and ball keys with T pins. I put a lot of consideration into the parting lines, as the mold sections needed to draft but some areas had deep undercuts. The mold is in ten sections: two each for the head and tail, with the body being divided into front and back halves of three sections each. The aluminum shim stock I purchased for the job ran short, so I cut up aluminum cans to supplement the shims, which I carefully inserted along the cut lines over the whole pattern.
Day four I finished the last batch of rubber, and began the mother mold. Free Form Air is so light it floats, and it’s impressively strong. It is mixed in equal parts, so I made up a number of well packed ‘snowballs’ and hand mixed the batches one at a time. Nitrile gloves protected my hands, and I used a steel pipe with ½ inch wood spacer strips to roll out the material between a top and bottom sheet of wax paper. I ended up needing 7 gallons total of the material at that thickness. 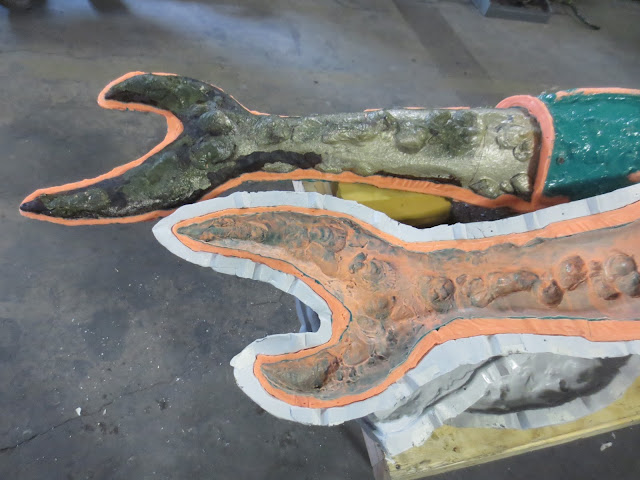 Once the whole pattern was encased (day six) I was able to begin pulling the hard outer shell off. After removing the shims, I cut the rubber with brand new X-acto blades. It released perfectly, resulting in ten sections ready for wax casting. 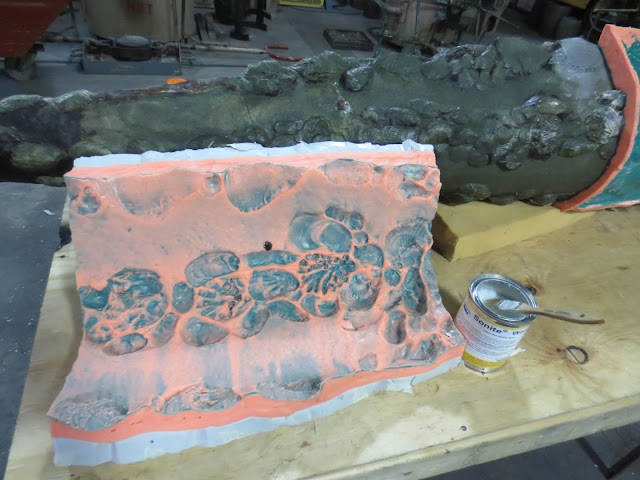 The next stage was making the wax's and sand molds for which we used the lost wax process ready for bronze casting which took another month or so in the making. 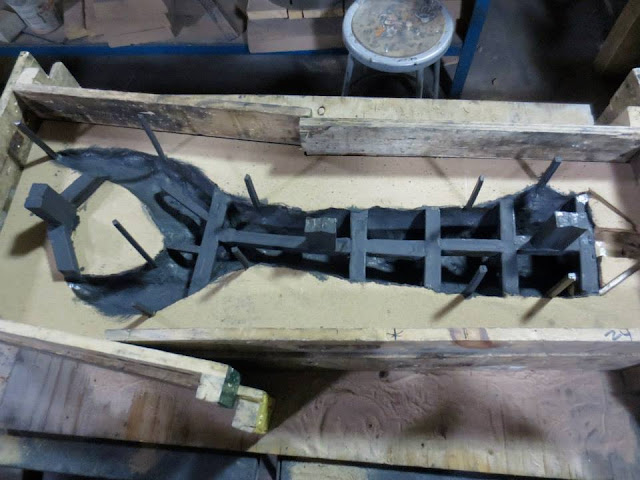 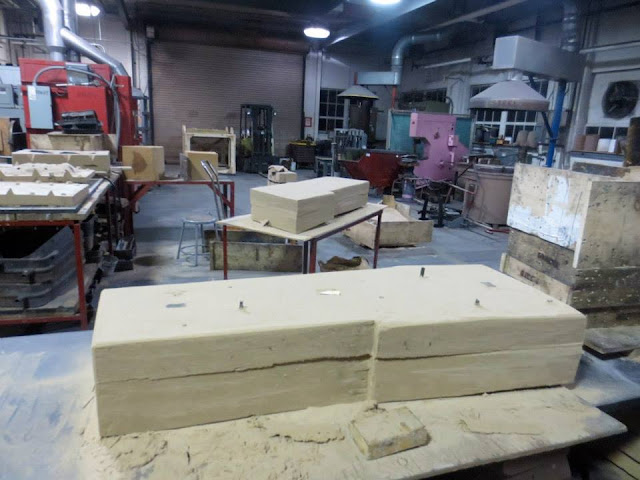 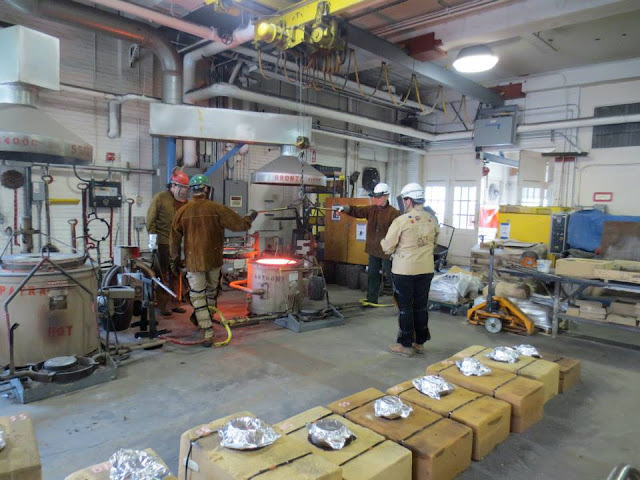 After the wax was melted out over a 24 hr period in the kiln then molds were lined up on the pour floor. All of the molds were cast in bronze on the same pour day : The pouring team was made up of Graduate Student Kevin Dartt, Myself and Professor Coral Lambert. 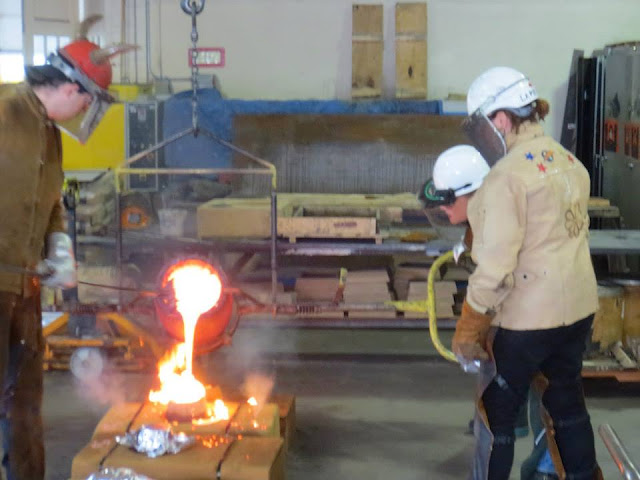 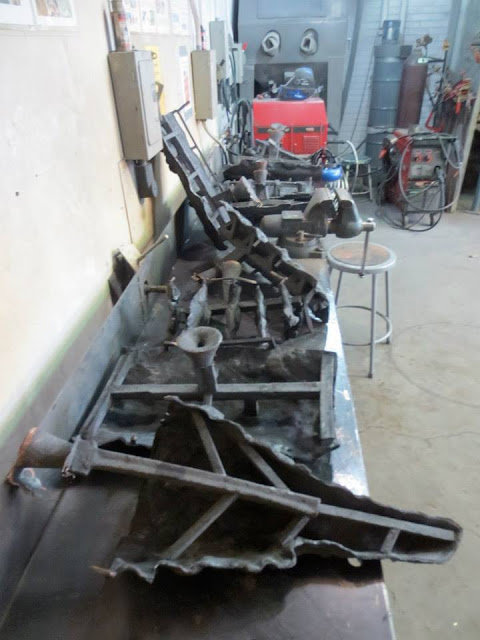 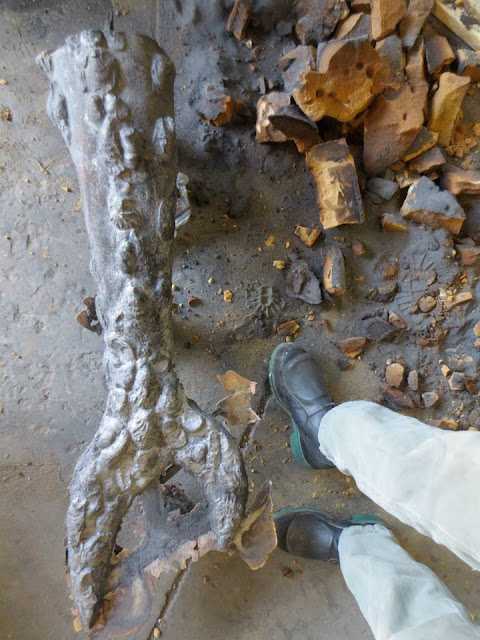 Once cast the sections were let to cool down and broken out of the sand molds: they look pretty rough at first but after sometime chasing and cleaning the texture was magnificent just like the majestic Sturgeon itself ! 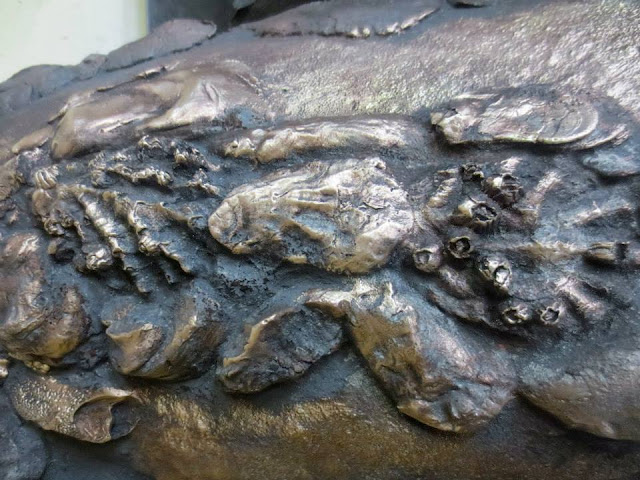 Final finishing work took place back in New Jersey. The Sturgeon Sculpture will be dedicated on Memorial Day Weekend : to find out more about the event follow this link to the article in the New Hope Free Press :
http://newhopefreepress.com/2016/05/17/nine-foot-sturgeon-arrives-on-banks-of-delaware-river-in-new-hope/