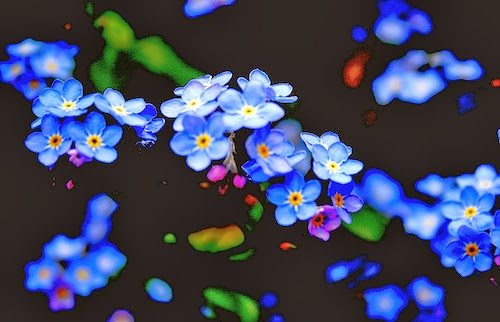 "On The Longest Day, teams around the world come together to honor the strength, passion and endurance of those facing Alzheimer's with a day of activity.  Held on the summer solstice, June 21, 2014, this event calls on participants to raise funds and awareness to advance the efforts of the Alzheimer's Association." *The idea is to rally your friends and raise money by doing what you love.
Alzheimer's disease is not an American phenomena, the disease is a growing epidemic worldwide.  Participating in the 7th International Conference and planting a Forget-Me-Not garden will be the first international activities taken on by the Alzheimer's Glass and Iron project.

Construction of the Alzheimer's Glass and Iron Forget-Me-Not garden will begin as soon as the crew arrives in Latvia.  We hope to acquire Forget-Me-Not flowers that are already growing and in early stages of sprouting.  We will plant a garden in the shape of a painting made by an elderly community suffering from Alzheimer's in New York, USA.  Haley Jelinek, Elise Betrus and Rosemarie Oakman will be the lead artists dealing with the layout and planting of the garden.  Students from Alfred University's National Casting Center foundry will also participate in the initial construction of the garden.

Every Forget-Me-Not seed planted represents a mind that is ravaged by this deadly disease.  We will continue to plant  Forget-Me-Not gardens until there is a cure for the Alzheimer's.

On the day of the performances and the volcano eruption, we will invite the audience to participate in Forget-Me-Not seed planting.  Participants have the option to donate with proceeds going directly to the American Alzheimer's Association.  Seeds will be passed out and trowels and shovels will be provided.  It is our hope that we will rally the community together while raising awareness and funds as well as beautifying our world with flowers.

*Taken from the Alzheimer's Associations Website.
Posted by Alzheimer's Iron at Sunday, March 09, 2014