My idea of what an artifact is comes from the Oxford English Dictionary definition of "artifact" which is described as "an object made or modified by human workmanship, as opposed to one formed by natural processes" or "an excavated object that shows characteristic signs of human workmanship or use." For the purposes of the assignment I chose to define an artifact as anything with human influence. If a human has made it, altered it, picked it up and used it for a specific purpose, it’s an artifact in line with my personal definition of the word.

For the artifact assignment I chose to focus on using the hand in order to produce forms that allude to function. I am interested in the idea of excavating an object and not knowing exactly was it was used for, but finding clues of it’s function by looking at its different aspects. If 1,000 years from now my artifacts were found, what kind of function could they imply? How can I make something that looks like it might be used for a certain purpose, but also have ambiguity to any such purpose? In addition to this, I am also interested in the process of making and how I can reference that process in the final form. By using the hand(s) as a basis for my artifacts I’m leaving an imprint of the wax process of making in the final metal cast. The dung and clay method of molding is very supportive of the reference to the hand, since it is such an involved process. The steps of sifting the dung, mixing the different layers of the mold and then layering them onto my wax pattern is so integral to my interest in the hand and how the hand is involved in the making process.

I enjoy the dung and clay mold process. It’s relaxing and it’s a lot different in doing a shell or sand mold. There is a variable of time that you have to account for. Different molds take a different drying time and you have to know by feel when you should add the next layer and whether it’s to wet or too dry. I’ve been having a lot of cracking happening during the final drying out of the mold and I think this is because I’ve been going to fast in adding the next layer to my molds. Since some of my molds cracked, I’ve also had a lot of flash in and I even had a mold bust open and let all of the molten bronze out of it before it could cool. This was upsetting, but I may have been pushing the limits of the dung mold process because this mold was almost as large as a football, albeit a hollow form.

I did research on some different types of artifacts and I was most interested in Native American and Viking tools and ceremonial objects. I thought that these provided the most interesting forms that didn't necessarily connect completely to their main function. I sketched my favorite forms here: 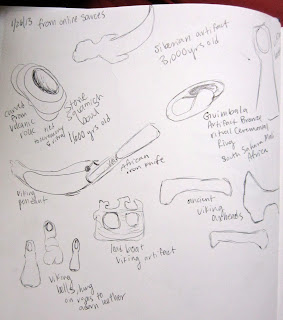 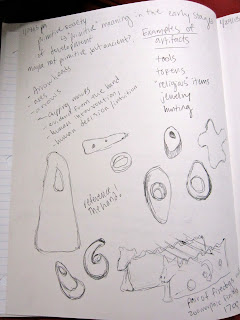 To make the wax version of the artifact I used warm wax, that was the consistency of silly putty, and molded the wax around different parts of my hands/arms. For my largest mold, I pressed the wax around my hand to create a sort of pouring container. For the smaller molds I used the tip of my fingers to create a recess into the wax form. After the pieces were sprued, vented and attached to a cup, the layers of dung and clay mixture were added.

Once the dung molds were finished being layered, they were left to dry out until the melt out kiln. The melt out charcoal kiln was also a very cool process. I never imagined that this kiln could be set up so easily. You could do this whole process in your backyard if you wanted to. I was very surprised that there was so much smoke from the kiln. I’m unsure if this was due to the moisture still left in the molds, the burning of the charcoal or the melting wax catching on fire. Or maybe it was a combination of all three of these. After the molds are cast and cooled for a few hours they can be carefully broken open. The pieces of used mold can be crushed and recycled by sieving it through the different sized sieves.

In the remainder of the semester, when the weather gets a little better, I would like to try making a kiln out of the dung/clay paste and see if this perhaps might keep more heat in. I am excited to see what I can make next. I would like to try making small intricate pieces, perhaps jewelry items, using swirls and twists of wax like the ancient Africans did using beeswax to make bronze jewelry.

The ancient Japanese method of sogata clay molding is very difficult for me. I didn’t really know what I was doing half of the time and I wasn’t sure if I was doing something wrong and if I was I had no idea how to fix it. But finally I got the first half of the piece mold finished. What I’ve learned is that you need the clay to be the right consistency when working with it because if it’s too wet it will all just gather at the bottom of your mold and if it’s too dry it won’t stick to your previous layer. But the water content in the mold mixture also depends on which layer you are working on. For the coarser material wetter might be better so it will stick to the previous layer, but it’s difficult to defy gravity with wetter clay. So if you need to cut back in with your mold you need to do that layer in parts so the clay that’s cutting back in has a chance to dry so it won’t collapse due to gravity. Also with a form that cuts back in on itself it’s very difficult to fit your hand into the flask to put on the layers of clay. You really just end up always hitting part of the clay you’ve already smoothed over. I’ve definitely learned to make patterns that do not cut back in on themselves because it was so frustrating doing that type of pattern for the first time doing a sogata mold.

I haven’t had much of a chance to patina metal in past projects, but I am excited to experiment with different color patinas. I would like to produce/find a patina that makes bronze look aged (say for 1,000 years) and I would also like to look for patinas that are brightly colored. For patination I am most interested in finding “natural” patinas that do not necessarily involve super toxic chemicals that I may not be able to get my hands on in the future when I’m on my own. The other reason I’m interested in natural patinas is because I don’t necessarily like to work with toxic chemicals and since the sogata and the dung and clay molding processes are natural processes without any toxic chemicals I think it would be good to use natural patinas.